Turning adventure into art with a 1963 Hillman Imp, with Terence Tracey 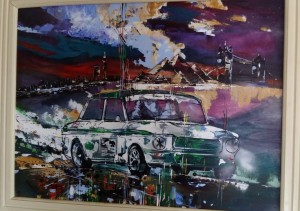 This is quick episode between shows, to let you know I’ve been on a break for a while, and am working on some varied and exciting shows, and coming up soon is a long chat I had with Terence Tracey – a Hillman Imp fanatic, and his adventure driving this small classic car through Africa on a ridiculous time frame! After spending the morning with him in one of his cars, I felt like I had just driven up through Africa and Europe!

The full episode will be out soon, but here’s a sneak peak of Terence showing me a few paintings about his adventure, and the award he won.

For the full story of Terence’s adventure, immersed with many wise words and funny anecdotes, be sure to subscribe to my channel on iTunes, Stitcher and YouTube, or check this blog talkpossibility.innercoaching.co.za and you can download the full show, coming out soon! You can also follow me on twitter @Telana.

Till then, look for the possibilities! 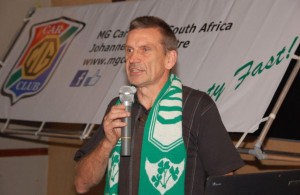 Born into an Irish-Catholic family of seventeen children, Terence was the youngest and still is! On completing school, he entered the hospitality trade as a trainee hotel manager working in the world-famous Towers Hotel in County Kerry, Ireland and in catering establishments in Paris, where he became a serious hobby photographer and took to writing poetry.

He moved to South Africa in the early eighties working for the hotel chains Southern Suns and Sun International for ten years before starting his own restaurant in Johannesburg. A few years later, he joined the First National Bank group, retiring at age fifty to return to the restaurant industry.

As a child, Terence recalls compliments from his teachers about his ability to write well. These accolades were remarkable as he was completely un-academic and quite a disruptive pupil for the most part!

He always had a keen interest in cars and enjoyed many successes competing in historic racing events in South Africa. In his car club, he took on the responsibility for the monthly club magazine for almost ten years.

No Way Back in his first completed book, although a previous attempt at writing has left him with a partly finished work of fiction, a project that he will soon complete. Terence offers keynote talks about his adventure, highlighting many lessons and laughs along the way.

Previous post
How to inspire communities to change, with Sihle Tshabalala – Ep 136
Next post
What’s possible for Entrepreneurs with the right Mentoring? With Denis Fourie