Author, CEO and Founder of Raizcorp, Allon Raiz shares his insights about the psychographics and the mindset of successful entrepreneurs, and the entrepreneurial journey itself.

Allon is the author of “Lose The Business Plan” and his latest book, “What To Do When You Want To Give Up” which tap into his experience of dealing with over 2000 entrepreneurs. 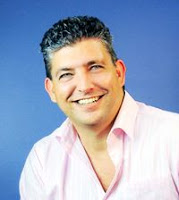 Allon Raiz is the founder and CEO of Raizcorp, the only privately held, unfunded, profitable business incubator on the African continent, supporting in excess of 240 businesses. Allon is the bestselling author of both Lose the Business Plan and What to Do When You Want to Give Up. He has also hosted a radio show and written and hosted a prime time reality TV show, both in the field of entrepreneurship.

Allon is the co-founder of the Entrepreneurs’ Organisation South Africa and Rural Roots, and sits on the advisory and judging boards of numerous local and international NGOs and entrepreneurial awards. Allon has also been appointed by the South African Cabinet to the board of the National Empowerment Fund (NEF).

Allon’s passion and focus on the development of entrepreneurs attracted the attention of the World Economic Forum (WEF) which, on 11 March 2008, awarded Allon as a Young Global Leader. In addition to working towards a Doctorate in Entrepreneurial Studies and Innovation, Allon is an accomplished international speaker who was invited to speak at the 2011 WEF Annual Meeting, held in Davos, Switzerland. In 2011, Allon was invited to become a member of the WEF’s Global Agenda Council on Fostering Entrepreneurship, making him one of 15 recognised global experts in this field.

Previous post
What’s possible with Skateboarding? With Rayne Moses : Ep 130
Next post
The journey of a fire detection startup, with Emily Vining : Ep 131