You’ve heard the saying, probably countless time: Perception is everything. Your perception influences how you see the world.

Yet we so often forget this, as our perceptions (the pairs of rose-tinted lenses or dark sunglasses through which we see the world) become so comfortable, that we’re so used to wearing them. They become our default. We forget that we are actually using some filters and could change them anytime we chose.

Sometimes we are active and conscious in changing them. Like when we read something, educate ourselves, seek out a mentor, coach or therapist to help us become aware of our choice in lenses that frame our world. We can then make healthier, more useful choices by changing the filters, or cleaning the lenses. 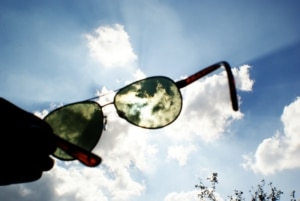 If we don’t actively engage in that process, life usually gives us a kick, saying it’s about time we do something differently or start thinking in a new way. Significant and emotional events, and also when things get bad enough, are usually the times we when we are forced into the process of re-evaluating our filters.

There is a certain filter that affects the way we see the world by interpreting everything in relation to ourselves.

This pair of glasses can be useful when worked in the positive, as we need to look after ourselves and keep safe. It’s part of our survival instinct, and helps us avoid life threatening situations.

Yet often we take this too far. We work this filtering system in the negative. When this lens is dirty, and misused or overused, it becomes the Victim-Mentality Lens through which we interpret everything and everyone as being against us. This leads us to especially see the relationship field as our battle ground.

The misuse of this lens that I am referring to is when we have become so protective and closed, (usually from some past hurt and lack of skills in dealing with others and setting healthy boundaries), that we can go to the extreme of generalising this view. Thus we filter everything as being against us. We fail to distinguish when we truly are a victim of circumstance, versus when we are projecting that we feel like a victim, or even mis-interpreting the situation.

It is for those people that I write, as my sincere wish is to break through their guarded wall, their way of using an important filter in the negative, to rather let in a little light. I hope to show them that there is another way; a way that is far more empowering and leads to better relationships; a way that is ultimately a much more positive and enhancing experience of life.

I have heard countless stories from my clients, like some of the professionals sharing about how they are battling with their bosses or specific colleagues. They find that they can’t give any input or suggestions or even mention warning bells about the projects they are working on, as it is taken so personally. Their boss or colleague becomes defensive and even vindictive.

I hear it from some of the young women who sit on my couch, with tears in their eyes, about how their mothers cry victim all the time, and yet will do nothing to change their lives. Any input their daughters offer them is further interpreted as a personal attack, leading to a breakdown in their communication, and ultimately in their relationship. 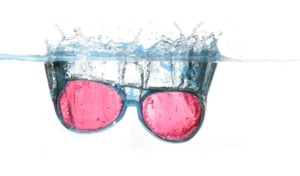 I hear it often played out when some of the single ladies share how there must be something terribly wrong with them, in that they are never chosen by the men in their lives, and their whole world crumbles as “yet again, I am rejected”…

And I hear it in some men, who failed in some business ventures years ago, and who now fear any confrontation and have stopped playing big in the world. They are scared of being found out as the fraud they feel they are, as they over- identified with being a failure…

How it is experienced by others

So often what is going on is that the victim mentality of the work colleagues, the mothers, and the single ladies, the entrepreneurs, tends to cloud their judgment to such an extent that everything gets interpreted from this reference point.

It plays out so extremely that even when someone skilled at giving feedback gently tries to point out to them about the set of glasses they are wearing, they cannot see, or won’t even begin to hear, what is being said.

The glasses they wear are so dark from the dirt, and so tightly fitted to their eyes, that no light can penetrate. There is no room for the truth to exist, no room for open discussion, no room for growth, resolution, or healthy relationship.

It is to these people that I ask to hear me when I say that it doesn’t have to be like this, and that those dark glasses they are wearing are often the cause of most of their troubles. These glasses serve as a self-fulfilling prophecy because any feedback from others, any positive events that happen (including any good that they do) are all still interpreted (and often discounted) from those dirty, dark lenses. This then further entrenches the way they wear those dark glasses. The lenses become part of the problem and not a useful resource to protect them when needed.

And because these glasses are so deep-rooted, people wearing Victim-Mentality Lenses often don’t realise how they come across, and how they play a part in the problems they moan and complain about.

This is due to everything being interpreted personally. Whatever another person says, as objective as that person might be in stating facts, it is all rejected by the Victim Mentality Lens and interpreted as a personal attack.

The dirty lens then says: “No one is ever on my side.” “You see, I am always the one who is wrong”. “I just won’t talk about it anymore, what’s the use, nobody listens”. “Everybody is against me. I don’t know what I did to deserve this.”

From the other persons perspective, they become so frustrated with this response, because from their side, no matter what facts they put on the table, no matter how many times they point out is has nothing to do with the person, and that the person is valued and has something positive to contribute, the meaning of their words is not heard.

It becomes a lose-lose situation. The person with the Victim –Mentality Lens is experienced as an overly defensive, often aggressive, sufferer that cannot see past their own lens, to see the facts about what is really going on in the situation. They won’t own their area of growth, or acknowledge the good they bring and the value they offer. The other person then often gives up, or ends up on my couch, asking how to deal with this person in their life.

How it breaks down relationships

What tends to be happening is both parties stop talking about anything meaningful. The person with the victim-mentality lens avoids all topics possible, even avoids people, and will only engage on a superficial level or on their terms.

The other person feels they cannot ask anything of the person with the Victim-Mentality Lens. They daren’t say they disagree or don’t like something or can’t make an event, as that will trigger an “episode”, and so they tip-toe around the person, going to extremes to try to placate them, often to their own detriment.

There is a “walking on egg shells” feeling to the relationship, with neither side being real, honest, open or even loving. Rather, the style of relating is to please, placate, negatively sacrifice, avoid, defend, and hide in fear, or the opposite of lashing out, arguing and attacking.

It’s a wonderful recipe for drama.

Nothing about this can lead to growth and connection, or the unlocking of more love and happiness.

What is lost from these lenses

So if you relate to any of this, if you feel that you might sometimes be wearing those Victim Mentality glasses and being overly judgemental, critical and personalising, then maybe it’s time to try loosening the grip of those glasses, just enough to explore if there is a possibility of seeing life in a different, more useful way.

Those glasses have become a form of protection, trying to protect you from hurt and pain, and yet they have also become the very thing that causes the most pain and hurt in your life. They are often the thing pushing what you most want away, which is the connection and love from meaningful, safe relationships. These lenses can often add to the actual lack of safety in the relationship. 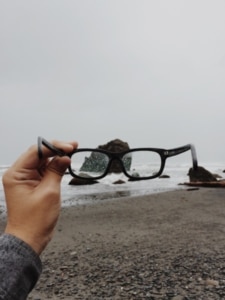 Without this useful information (which is readily available when you use cleaner, lighter coloured lenses that let in more of the facts) the domain of relationships feels unsafe. And you don’t get to develop the skills that help you stay safe or develop healthy relating and communicating skills.

What could be gained from changing these lenses:

By loosening those glasses to clean the lenses a bit, or even changing them to a more empowering way of viewing the world and relationships, you will find that:

In Part 2, I’ll explore more about how to change those glasses from the victim mentality where you take everything too personally, to the more useful ones of strength within yourself to engage positively with those around you.

Till then
Be real!
Telana